The Peacocks are guaranteed a spot in the Evo-Stik League end of season playoffs after they drew 1-1 at Wimborne Town yesterday afternoon (Monday 6 April).

Town went into the game knowing victory at the mid-table Magpies would seal their place but as it transpired, Didcot’s failure to win at North Leigh meant one point proved sufficient for Taunton to secure participation in the play-offs for only the second time in their history.

The game itself proved to be a tedious affair as both teams failed to generate any fluency on a hard bumpy pitch.

The opening twenty minutes passed without any incident whatsoever before the visitors were presented with the first chance, Craig Herrod shooting well wide after Scott Arnold had missed Ben Mammola’s launch downfield.

Wimborne keeper Jason Harvell made a couple of timely interceptions to collect the ball under pressure before the hosts grabbed an unlikely lead two minutes into first half stoppage time.

Soon after Luke Stone had driven an opening over the bar, the same player ran onto a lobbed pass from Jon Blake and reached the byeline before pulling the ball across the box for Sam Griffin to appear and fire back across Lloyd Irish to put Wimborne one up.

Stone again put another effort over the bar after getting free down the left to conclude an uninspiring first 45 minutes.

The Peacocks improved after the break although still nowhere near their best. Aaron Ward-Baptiste had a shot held by Harvell before an equaliser arrived on 64 minutes.

Graham Mercieca was pulled down thirty yards out and his free kick which followed deflected off the defensive wall to hit the net past a wrongfooted Harvell.

The goal gave Town added impetus as they continued to enjoy most of the play but despite pressing they couldn’t find a second goal.

Appeals for a penalty after Herrod’s shot hit an arm were waved away and it took a block from Billy Maybury to foil a Jamie Short strike close to time to preserve Wimborne’s point.

“A case of job done. We went to Wimborne with the aim of securing a play-off place and that’s exactly what we did.

Admittedly and in a perfect world I’d have liked it to be achieved in a bit more style on the day but we have to look at the bigger picture and say that if we’d been offered a play-off place with three games to go back in August we’d have chewed hands, arms and legs off.

The game itself was pretty forgettable and affected by the strong breeze and sloping pitch.

You could see that both teams were tired and neither were able to stamp their mark on the game.

We now have three games until the play-offs to get ourselves in the best possible shape.

There will be lots of talk about finishing 2nd or 3rd for home advantage but I’m not so sure that this is overly important if you look at the play-off winners over the years.” 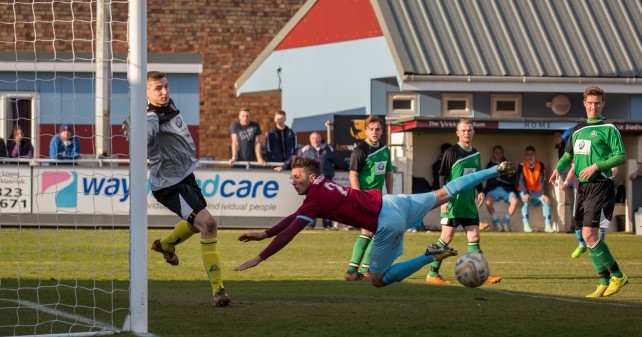