Three of Taunton’s streets are set to become pedestrianised later this year during an 18 month trial.

St James Street will be pedestrianised between North Street and Lower Middle Street.

The news of the road closures comes as Taunton celebrates its new Garden Town status.

The improvements are at the early stages, so to ensure they meet the needs of shoppers, visitors and retailers, the council will be running a public consultation to invite people’s views.

The scheme would be run as a trial and goes hand-in-hand with Taunton’s New Year designation as one of a new wave of Garden Towns and is a key part of its growth programme.

“Taunton becoming a Garden Town is a real opportunity for us to review our town centre and look at how we can create a better environment for residents, shoppers and visitors, which will help attract investment and businesses to thrive.

We’ve seen this work well in other areas, and we’re keen that traffic is redirected to more appropriate routes. We want to free up space for new and improved public areas that are attractive and inviting to walk, shop or simply sit and appreciate the place. It would be more pleasant for everyone with fewer vehicles, less pollution and reduced noise.”

The project team will be arranging meetings with businesses, organisations and residents who could be affected by the proposals on 18 January 2017.

“Improving public space in our town centre could attract more visitors to Taunton and enhance the look and feel of the town, confirming it as a key destination for shopping, culture, recreation and eating out.

This is a great fit with our new Garden Town status that aims to marry the best of town and country living. This is all about making Taunton a place where people want to work, live and enjoy.

We want to engage with key stakeholders to ensure that the practical issues associated with the changes can be factored in prior to a wider public-consultation which will begin next month.”

Public consultation would start in February this year.

Information on how to view and provide feedback on the proposals will provided and publicised nearer the time.

If the proposals gain support, the Council would introduce the changes on a trial basis in Autumn 2017.

The pilot scheme would run for 18 months to monitor and assess the changes before any permanent public space changes come into effect in 2019. 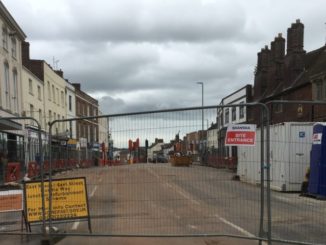 Man detained by police at takeaway restaurant in Taunton