Two fire appliances from Taunton were mobilised following over 30 calls from passing motorists, including one from the driver, reporting a people carrier that had caught fire on the M5 Southbound between Junctions 25 and 26 at 13:43 this afternoon (Monday).

On arrival, crews confirmed the vehicle was well alight and set to work quickly extinguishing it with 1 hose reel jet, a compressed air foam jet and 2 BA wearers.

The incident and smoke caused the Southbound carriageway to close temporarily and caused disruption to flowing traffic.

The police and highways attended to assist fire crews until the incident was over and the vehicle and scene were made safe.

Duty of care was left with the owners awaiting recovery.

Fire crews called to 4 vehicle collision on A39 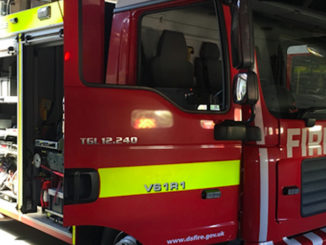 Taunton to lose its only specialist rescue tender vehicle

Six kitchen fires in Taunton in past week