The Met Office have issued a yellow weather warning for snow and Ice for Taunton and the south of the UK for Tuesday into Wednesday.

A band of persistent rain in places will move in from the middle part of Tuesday at the same time as colder air digs in behind. This is expected to turn the rain to snow on hills initially, then also to low levels in places later.

We could see 3 to 5 cm above 200 metres, with up to 10 cm in a few places like Dartmoor and Exmoor and parts of Somerset, Wiltshire and Gloucestershire. A light covering of 1 to 2cm is possible at low levels.

As skies clear overnight the main risk will be ice. It’s likely to form on some untreated surfaces and the rain, sleet and snow will be followed by wintry showers on Wednesday morning. This could give a further slight accumulations of snow in a few places, even to lower levels. 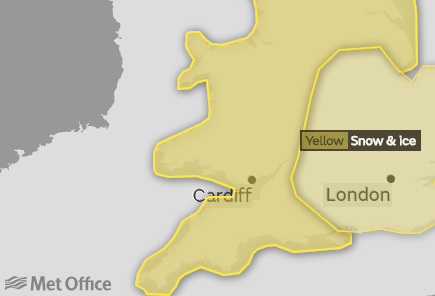 The Met Office warning will be in force from midday on Tuesday until 11am Wednesday. The weather warning states that some roads and railways are likely to be affected with longer journey times by road, bus and train services. Some injuries from slips and falls on icy surfaces are possible and there will probably be some ice on some untreated roads, pavements and cycle paths.