One fire appliance from Taunton, Bridgwater and Ilminster along with a water carrier from Bridgwater and a duty officer were immediately mobilised following multiple calls of a vehicle fire on the A358 near West Hatch at 10:06 this morning (Saturday).

On arrival, the incident commander confirmed a fire within the rear of a trailer unit involving rear tyres and straw.

Crews initially got to work using a hose reel jet and managed the traffic.

The incident commander requested the attendance of the police to assist with traffic management.

The incident commander confirmed that the trailer was carrying thirty one tonnes of straw and approximately two to three tonnes was involved in fire.

Police arrived on scene and assisted the crew with traffic management.

A local farmer assisted the crews with a mechanical grab to remove the straw bales from the trailer.

At this time the police closed the road for the safety of the crews and the farmer on scene.

The incident commander requested an ambulance for the driver who had suffered minor burns.

The incident commander believed the cause of the fire was due to the tyre exploding and was confirmed as an accidental ignition.

Police have reopened the A358 in both directions.

One fire crew remain at the scene damping down hotspots.

The A358 is closed in both directions around West Hatch Lane between Ilminster and Taunton as fire crews deal with a lorry fire.

Fire appliances from Taunton, Bridgwater and Ilminster are at the scene. 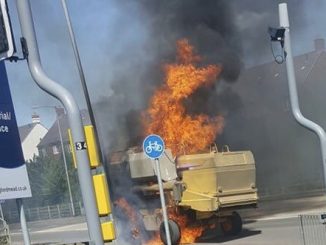