A series of environmentally-friendly initiatives and an end to cuts to frontline services were among the plans outlined in a speech at Somerset County Council’s annual meeting today.

Council Leader David Fothergill outlined a series of “bold and ambitious” ideas and proposals at County Hall which included bringing new life to discussions about the potential for a unitary council or councils in Somerset.

In his speech he also outlined how a new tight financial grip was turning the authority’s finances around – highlighting a four-fold increase in the Council’s General Fund – its ‘rainy day savings account’ – for particular mention.

“We have taken active steps, taken difficult decisions,” Councillor Fothergill told the meeting. “We are now able to say that we are coming through the hard times, through the financial challenges, and we are rebuilding the foundations for a strong and healthy financial position”.

Cllr Fothergill made a series of announcements looking ahead to the next three financial years outlining a number of major initiatives:

In the meeting, Cllr Fothergill said: “We have to keep a tight grip on our finances. We are not funded to the level we should be and will continue to lobby and to fight for fair funding for our council.

“We have in place nationally recognised programmes to support our growing elderly population to remain independent for as long as possible, but the numbers game alone will show that there is only so much we can do before we reach a tipping point. Government has to step in and sort out how it will fund social care into the future”. 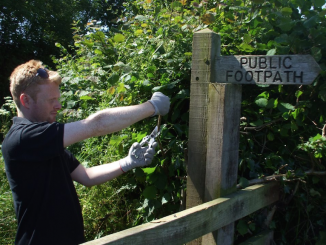 Love the Outdoors? Then Adopt a Path