A multi-million pound project to upgrade M5 Junction 25 at Taunton reached a key milestone today with the lifting of the beams for a new 15.5m span bridge with a total width of 34m.

The Blackbrook Bridge will provide a new arm onto the Junction 25 roundabout, helping ease congestion by increasing the capacity and improving traffic flow. 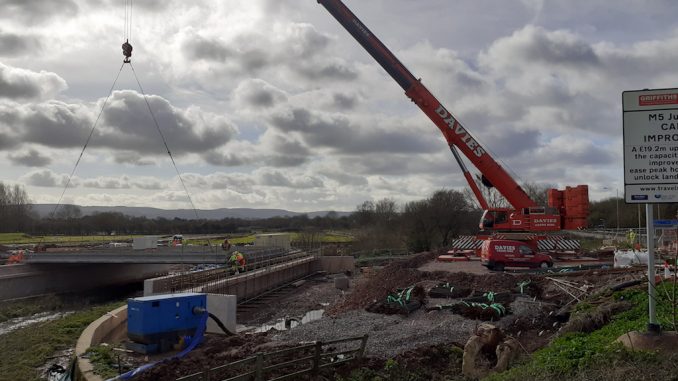 The wider scheme is projected to improve journey times, reduce congestion, improve Park & Ride journey time reliability and create a more attractive gateway to Taunton, Yeovil and the A303 from the M5.

The scheme will also unlock access into the proposed Nexus 25 employment site and support other planned growth across Taunton.

Each beam measures 15.5m long, 720mm deep and 920m wide and weighs 17.3 tonnes and arrived in 18 lorry movements, which were carefully co-ordinated.

By the end of Wednesday, 24 beams are due to be in place with the operation due for completion on Thursday, weather permitting.

“The new Blackbrook Bridge is such a key part of this project – providing a new arm on the roundabout to increase capacity and improve traffic flow.

It was a privilege to see the bridge beams being lifted into place – no mean feat when you consider the number of beams and many complications when working so close to one of Somerset’s busiest roads.

The scheme is really starting to take shape and we’re really pleased with the progress so far.“ 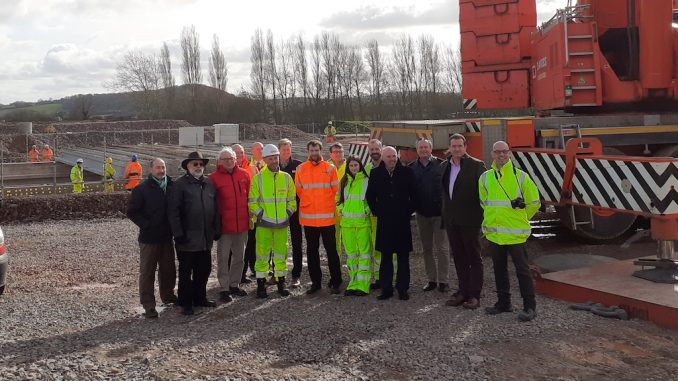 “Improving connectivity across the Heart of the South West area is one of our major aims at the LEP.

The upgrade of Junction 25 is an important part of our strategic transport investment using Growth Deal funding, and it’s one of our major investments having allocated £12.19m to the overall cost of £19.2m.

It’s the main access point to Taunton from the M5 and provides a critical link to the second strategic route into the South West via the A358 and A303.

I look forward to seeing this major project take shape, and the lifting of the bridge marks a major milestone.”

“Griffiths are delighted to have achieved this key project milestone. An achievement that has resulted from the exceptional teamwork between Griffiths and Somerset County Council project teams who have both worked tirelessly to plan the works in a way that minimises disruption to the public.

I would also like to thank those impacted by the works for their patience and look forward to the next key project milestone being achieved.”

Junction 25 currently experiences congestion in both peak hours, with queues frequently extending along the A358 in both directions.

This upgrade involves full signalisation and enlarging of the roundabout, widening of the eastern exit, a new roundabout to access the proposed Nexus 25 employment site, and safer pedestrian and cycling facilities.