Avon and Somerset Police have been collaborating with young people on the complex issue of knife crime, in a way that puts them at the heart of helping the police to understand and tackle the problem.

Over the past year, police have been working with young people from four schools across the Avon and Somerset area, in order to better understand why they might carry knives, what support they want from the police, and the issues they face in their daily lives which can lead to them becoming involved in knife crime and violence.

The police have supported them to turn those ideas into short, animated films, working alongside student animators at UWE Bristol in this creative process.

The films form part of a wider campaign in Taunton, Weston-super-Mare, east and south Bristol, which sees the students’ work reflected on buses, billboards and bus shelters, as well as the key messages from each film discussed on local radio and in the local media. Importantly, the films and messages are also being shared widely on social media, with a prize on offer for the school whose film gets the most views on YouTube.*

In Taunton, the project has involved pupils from Taunton Academy. The year 10 students’ film, called Eye for and Eye, explores how we all have a choice about whether or not to carry a knife and the importance of making positive decisions which can determine your future. Instead of picking up a knife to retaliate against bullying, the character in the film chooses to focus on his passion for drumming. It ends with the message ‘live to your positive beat’.

PCSO Georgia Coles who works closely with the school and who has been involved with the project from the start said: “After months of hard work by the students, and the frustration of having to put the project on hold due to the pandemic, it’s brilliant to see this campaign come together.

“The key element of this project is that it has young people’s opinions at the heart of it. We know that police telling young people not to carry knives is not the solution, and police enforcement alone will never be enough to resolve this complex issue.

“By listening to young people’s voices and engaging them in a creative process to produce campaigns which mean something to them and their peers, we hope that they can feel empowered and less fearful.”

The two boys who produced Eye for an Eye said: “More young people should know about the dangers and the consequences of knife crime. More young should people take part in projects like the one we have taken part in.”

The students have also been working with a local film maker to produce a documentary which explores the themes raised in the project and which looks at the work being undertaken by various agencies to tackle serious violence.

During the creative process, the young people spent time in workshops with their peers, facilitated by IDEAL Sustainable Development CIC, discussing the issues, before coming up with a film concept that they pitched to a panel who chose one idea to take forward.

The winning teams then spent time developing their ideas with the team from IDEAL and student animators from UWE Bristol, who then brought the ideas to life on screen.  Legendary animation studio Aardman Productions also gave their support to the project, inviting the young people to attend a special day at their Bristol site, where they learned more about how to create a successful animation. The team at Aardman also provided professional guidance and support to the young people as their films developed.

Police and Crime Commissioner for Avon and Somerset Sue Mountstevens said: “Young people should be free to experience and enjoy life without the fear of challenging confrontations or upsetting situations as a result of knife crime.

“I have been saddened to hear that some young people do not feel safe in their communities due to a fear of serious violence. I hope that by working closely with young people on this innovative project we can empower them to become part of the solution.

“It is really promising to see such inspiring films produced and I really hope they have a long-lasting, positive impact on our communities.”

* To see the campaign films, to get advice and support, and for the competition terms and conditions visit www.avonandsomerset.police.uk/knifecrime 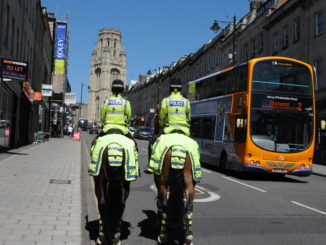