An Alzheimer’s Society survey reveals the impact of lockdown on people’s exercise habits in the South West.

Walking has taken a back seat through lockdown, with the average UK adult reaching just 2,700 steps a day – a quarter of the recommended amount.

A survey by Alzheimer’s Society shows that in the South West, the average daily step count sits just above this national figure at 3,055 steps, with over 40% of those surveyed from the region walking less than 1,000 daily steps.

Alzheimer’s Society is encouraging people to break lockdown bad habits and get active to raise money, by signing up to one of the charity’s several walking events.

People can register to do their own Memory Walk on Saturday 20 March, or another date in March that suits, or look to challenge themselves with a ready-made 13 or 26-mile trek in the summer in one of five iconic locations across the UK, including Dartmoor and Stonehenge. They are all Covid-19 secure and have all been specially adapted to accommodate social distancing.

Belinda Crowhurst, who lives in Ivybridge on the edge of Dartmoor National Park, will be taking on the Dartmoor Trek after her father, Gavin, was diagnosed with early-onset dementia in his early 60s.

“When I saw Trek26 was on, and local to me, I was delighted that I could do it. We first began to realise that there was something not quite right with dad when, just after my son was born 10 years ago, he struggled to work out how to use a digital camera. He was an engineer and there was nothing he couldn’t fix so this was completely out of character and he was just 60, so it seemed a bit early for just old age.

“We became really concerned when he became District Governor of the Rotary Society. It was a big position he worked towards for years and when it came down to it, he couldn’t do it. He was then a keynote speaker of a conference and we all went as a family. He was standing at the lectern – my dad who could do anything and fix anything – but he didn’t know what he was doing, standing in front of a room of hundreds of people. How I didn’t run on the stage, I don’t know.

“The long-term future is grim. Nobody goes into this with their eyes shut. We have all decided though that we need to get busy living. How many years have we got left with dad? How many years that the children have a grandfather who knows who they are. The next few years are not going to be much fun so we’re trying to capture as many memories before then.”

Joining Belinda and thousands of other supporters set to embark on a new walking challenge in 2021 is TV star and long-time Memory Walk supporter Kevin Whately, who will endeavour to take on a Trek26 event for the first time.

The Auf Wiedersehen Pet and Lewis actor, whose mother Mary passed away with dementia in 2009, is encouraging the nation to take on a walking challenge this year following a devasting year for people with dementia.

He said: “I know from personal experience the impact dementia has on those affected and their families- coronavirus has only exacerbated these challenges further for thousands of families affected by the disease in the South West.

“I am lucky enough to have participated in several Memory Walks, which are always a wonderful way to celebrate and remember a loved one who has been impacted by dementia, as well as enjoying the physical and mental benefits of the great outdoors. I’m now looking forward to upping my steps by taking part in one of Alzheimer’s Society’s trek this summer.

“Money raised will help Alzheimer’s Society reach and support more people through the charity’s vital services, like the Dementia Connect support line, which have been a lifeline for thousands of people. I can’t think of a better reason to take on a new challenge.”

Other survey results include:

“Coronavirus has turned life upside down for everyone, especially those affected by dementia. There are more than 92,500 people living with dementia in the South West. They have been worst hit by coronavirus in terms of deaths, both from the virus and knock-on effects of lockdown, and need us now more than ever.

“Unfortunately, the pandemic has hit us hard financially, despite an unprecedented demand for our services. We want to continue to reach as many people as possible, which is why we’re calling on everyone to put their best foot forward and sign up to one of our walking events.

Find out more at alzheimers.org.uk/events

Dementia Action Week – 5 ways to get involved in Somerset 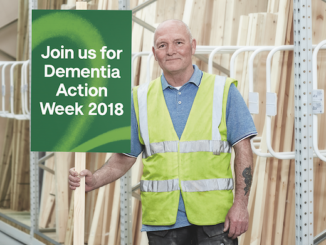