This March we are very excited to be launching a new radio soap on Apple FM. 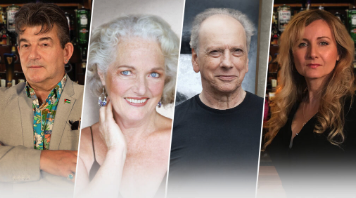 John Altman [EastEnders, Quadrophenia, Remembrance), Louise Jameson (Doctor Who, Bergerac, EastEnders), Raad Rawi (Tyrant, Dan Dare) and Corrinne Wicks (Emmerdale, Doctors) are to star in a brand-new radio soap opera set in a post-Covid world in which the villagers of Greenborne rebuild their personal and professional relationships as they negotiate the emerging freedoms of summer 2021.

In what is the first UK radio soap to be broadcast nationwide since Waggoners’ Walk, which ended in 1980, John plays Alan Godwin, the landlord of The Fox and Dragon. An ex-detective inspector and a real rough diamond, he is a tough, streetwise, but honest man with a copper’s nose for trouble. His village, Greenborne, is slowly waking from the long nightmare of Covid-19. Set six months in the future, it starts in the summer of 2021, when the entire country (and world) is adjusting to the new ‘normal’. The majority of the UK population has been vaccinated, but a series of ‘circuit breaker’ lockdowns are still in place. For now, the virus is considered to be under control.

The story begins as a major figure in the community, Evie, [Louise Jameson, Doctor Who, Bergerac, EastEnders) makes her return from a long Covid-19 imposed exile, threatening to ruffle feathers. John’ character (Alan) is struggling to get his business back on its feet while trying to keep his lively younger wife Beverley [Corrinne Wicks, Emmerdale, Doctors] from spending too much time on her back. Meanwhile their twin teenage kids, Lewis and Daisy [Finley Pile and Luci Fish] are busy breaking both hearts and the law.

The owner of the local shop Tanny Jefferson [Amy Rockson, Holby City, Doctors] is puzzled by mysterious cash losses and her husband Matt [Ali Zayn] appears to be constantly ill. A local Chinese girl, Chloe [Rebecca Yeo, Alien3 and Strangers] is getting hate mail and her partner, Sandra [Niamh McGrady, Holby City, The Fall] is determined to discover the culprit. The local mechanic Arjun [Raj Ghatak, Dead Set, Ghosts and EastEnders] is seeing a new woman, Lisa (Ally Murphy) only months after losing his wife to Covid – much to his son’s fury – and as family patriarch, Samesh [Pal Aron, Casualty, The Archers) attempts to provide the voice of reason, the arrival of Arjun’s sister-in-law, Piya [Bhavnisha Parmar, Doctor Who] adds further complications. If that isn’t enough drama, an exotic Iranian artist, Farhad [Raad Rawi, Tyrant, Dan Dare] has moved into the village, causing hearts to flutter and gossip to spread.

With misunderstandings, half-truths, secrets, revelations and surprises in every episode, Greenborne offers a fast-paced, fun glimpse at where we might all be on the other side of lockdown and, most importantly of all, while we remain starved of ‘normal life’ it offers a vision of hope for the future.

John Altman says: “I am very excited about Greenborne as it’s not only a part I could really get my teeth into, but it is about hope and rebirth, amongst many other things, and will appeal to the whole family. It is a little bit of escapism at a time when we need it the most.”

Corrinne Wicks adds: “I am so terribly excited and flattered to be asked to be part of GREENBORNE. ‘The Archers’ is such a part of so many of my friends Sunday mornings and is engrained in the psyche of British life and who knows, maybe Greenborne may do that too. I have always been a huge fan of soaps, especially ‘EastEnders’ so my excitement at being cast as John Altman’s Mrs is a bit embarrassing. I’ve been lucky enough to work on several soaps (including a Polish one an experience best left to TV history) including being part of the original cast of what was then a new daytime soap, ‘Doctors’. There is something uniquely special about being in at the beginning of something like this and witnessing the birth of a whole new society, a new civilization almost, and Greenborne is no exception.“

The numerous storylines are threaded through the Community Radio Station where a number of the characters, including a young aspiring DJ, Jeet [Shash Hira, Smighties and Thomas Edison’s Secret Lab] and the surprisingly old-school female vicar [Laura Shavin, The Now Show and Mr. Bean: The Animated Series] are regularly heard broadcasting under the watchful eye of Logan [Joshua Manning, Intergalactic Kitchen], the Scottish station manager with a secretive past.

Greenborne plays out in the shadow of the virus but the drama sets out to celebrate the lives of people as they overcome the dark times and emerge into the light. Telling tales laced with humour and warmth, it is a positive and upbeat soap opera, offering listeners intriguing and affecting stories about a life that we can all only dream of beyond the current lockdown.

Louise Jameson says: “I’m thrilled to be part of the GREENBORNE cast. It’s lockdown genius to launch a contemporary audio soap, containing humour, depth, relationships and all their complexities; alongside village fetes and the effects of Covid. Covering matters universal and neighbourly – a safe space to debate dangerous issues. Long may she run.”

Greenborne is devised by Colin Brake [EastEnders, Doctor Who] based on an idea by himself and Andrew Mark Sewell (Dan Dare, I Robot, Mrs. Palfrey at the Claremont), it is produced by UK indie B7 Media and financed by a grant from the Audio Content Fund.

Colin says: “At their best soaps offer up a mirror to society, allowing us to see our daily hopes and fears played out amongst a cast of characters that we can empathise and identify with. Covid-19 has had a dramatic and long-lasting effect on all of us, but Greenborne has been created and designed to take a positive look at how we may begin to heal and rebuild our ‘normal’ after the trauma of the coronavirus crisis.”

Series Producer, Helen Quigley adds: “It has been some years since a brand new radio soap debuted on British radio and I’m particularly excited that Greenborne will have its inaugural broadcast on community radio stations across the UK. Greenborne is meant to be familiar to all of us to some degree; whether it’s the location, the people or their stories, but mostly we hope it entertains. I’m also delighted that we have assembled such a diverse cast, which again I hope will give Greenborne a wide appeal.”

Andrew Mark Sewell, Executive Producer and Series Director, said: “It has been some years since a brand-new radio soap debuted on British radio and Greenborne is the realisation of a long-held ambition to produce a new radio soap more in step with our times. Greenborne offers a fast-paced, fun glimpse at where we will all be the other side of lockdown, and, most importantly of all, while we remain starved of “normal life” it will offer a vision of hope for the future. I couldn’t be prouder of what we’ve created, and I hope that the listeners will feel the same.”

You can catch the soap on Apple FM on Saturdays at 12:15pm on our Something For The Weekend show from 27th March. Get a sneak preview below.