This year marks the tenth year of Taunton Literary Festival. The festival is organised by Brendon Books as an independent bookseller and community interest company. It should have taken place last year but, like the Euros and the Olympics, the literary festival 2020 will take place in 2021.

In recent years, the festival has been held in November but this year it will be over 3 months. The first talk will in fact take place on 31 August with Ann Cleeves author of the popular Vera and Shetland books and end with ex Labour Minister Lord Peter Hain talking about his journey from Pretoria to the House of Commons.

These are two great talks to begin and end with but there are also a great variety of talks of a range of subjects between these two events – 30 events in all.

As well as the Ann Cleeves talk, there are further fiction talks with Karen Maitland on for her book Drowned City, a historical fiction thriller set in the early 1600s during a Somerset Tsunami, an interview with Rachel Edwards who has just moved to Somerset and has been a regular guest on BBC Radio. She will be talking about her latest book, Lucky. Hazel prior will also be returning to the festival to talk about her second book in the ‘Penguin series’, The Call of the Penguin and there will be an opportunity to quiz her about her road to becoming an author.

Poetry is also well represented. On Wednesday 7 September there will be a lecture performance with reading by Graham Fawcett on Chaucer while on Wednesday 13 October there will be a poetry reading with Chrissy Banks for her new poetry collection Frank. This is preceded on the Monday by a poetry workshop for which all are welcome.

In the field of politics we have former Channel 4 and Newsnight economics editor Paul Mason whose subject will be how to stop Fascism. Gavin Esler will discuss the possible end of the union and what being British will mean in the 21st century. Saul David returns to talk about the origins of the Special Boat Service (the first officially sanctioned biography). For his book Saul interviewed Taunton resident Jim Booth, the 100-year-old SBS hero from D-Day who plans to attend the event with his daughter. While on the subject of the sea, Meg Clothier talk about her new book Sea Fever and all things maritime.

In the world of science we have Brian Clegg describing the ten most important events in physics that shaped the world. David Whitehouse talks about the Apollo space missions and where the future lies in space travel and comedian Robin Ince will describe his unusual route into and his love of science. Michael J Benton will discuss everyone’s favourite, Dinosaurs, and new theories about their appearance and behaviour.

Nature writing is represented by number of books and talks. 3 authors Anita Roy, Pippa Marland and Zakiya McKenzie will be discussing their new book on nature which has the poetic title of Gifts on Gravity and Light and which features a diverse range of authors. Festival regular Stephen Moss will give a talk on Britain’s favourite birds, Ruth Pavey will take us Deeper Into the Wood, her new book on her experience of owning a wild wood in Somerset, and Derek Gow will enlighten us on recent efforts to bring back the beaver. Storyteller Martin Shaw encourages us to see the world, and in particular, the wild world of nature as a place of community and adventure.

Paula Byrne is travelling all the way from Arizona where she now lives to talk about her new biography of Barbara Pym in her new book The Adventures of Barbara Pym. Marcus Paul will be giving a slideshow and talk on pioneers of the Wild West.

Travel writers Hilary Bradt and Janice Booth will be showing slides and giving talks on a tour of Connemara in the 80s and the remote island of Socotra while Peter Fiennes will be discussing the relevance of the Greek Myths today in his talk, A Thing of Beauty, Travels in Mythical and Modern Greece.

This being Somerset, of course we have talks on cricket and cider. Somerset and England legend Vic Marks will be interviewed about his new book Late Cuts. James Crowden will discuss the history of Cider making in Somerset and signed copies of his new book Cider Country will be available.

Christian Wolmar makes a welcome return to give a slideshow and talk about some magnificent railway stations featured in his new book Cathedrals of Steam.

Megan Stallworthy will be offering a bookbinding workshop at the library while Peter and Susan Barrett, who have recently celebrated 60 years of marriage, will discuss their experience of putting an illustrated book together and having it published.

Last, but not least, Local hero doctor Lucy Pollock will be talking about getting older. All profits from the ticket sales for this event go to Age UK Somerset.

So Brendon Books has it all covered! Fiction, poetry, politics, biography, science, nature, cricket, cider, railways, comedy and bookbinding. For more detail (not that you need it!) at brendonbooks.org or call 01823 337742.

Early years careers fair could be your route into childcare 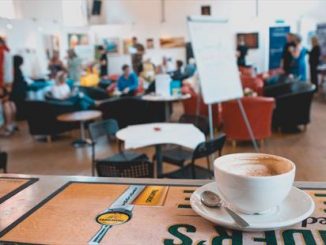